Skip to content
Posted 1 month ago 3 Comments by Dana 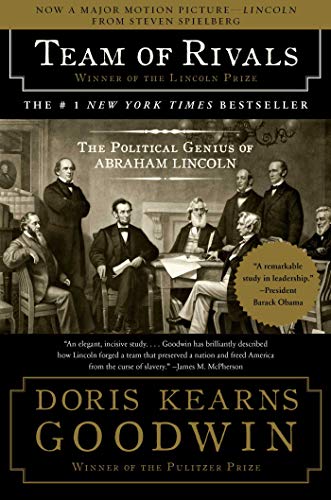 I heard Goodwin talk about this book on NPR, and she sounded like she’d been an eyewitness to the events. Sold me the book.

On June 17th–I’ve been a hundred pages from the end for ten days. I don’t want Abe to die.

July 17th — Okay, I finally made myself finish. Abe’s dead and I’m a wreck.

In this book Goodwin puts Abraham Lincoln in the context of his peers, many of whom ran against him for the first Republican nomination for president (remember they’d just invented that party) and one of whom, Stanton, had treated him with outright contempt in a law case years before. Seward accepted the job of Secretary of State thinking Lincoln would be his puppet, and Chase literally ran his second campaign for president out of the Department of the Treasury. Lincoln understood them all, tolerated them all, put them all to work for the nation that needed them so badly, and jollied, coaxed, cajoled and reasoned them all to victory. A reporter asked him how he could take all these vipers to his bosom and Lincoln replied that these were the best and most able men available and their country needed them, and that he wouldn’t be doing his job if he didn’t put them to work for it. There can’t be anyone who has ever occupied the Oval Office more selfless than Abe.

This book is wonderfully written, accessible even to the most casual reader, full of humor and choler and kindness and vitriol, and wisdom. Goodwin has that ability known only to the best historians (David McCullough does, too) to pluck the exact quote necessary from the record to illuminate the scene she is describing, and make the transition from past to present seamless. Listen to Goodwin on Lincoln in his 1862 state of the union address (pp. 406-7):

…he closed his message with a graceful and irrefutable argument against the continuation of slavery in a democratic society, the very essence of which opened “the way to all,” granted “hope to all,” and advanced the “condition of all.” In this “just, and generous, and prosperous system,” he reasoned, “labor is prior to, and independent of, capital.” Then, reflecting upon the vicissitudes of his own experience, Lincoln added: “The prudent, penniless beginner in the world, labors for wages awhile, saves a surplus with which to buy tools or land for himself; then labors on his own account another while, and at length hires another new beginner to help him.” Clearly this upward mobility, the possibility of self-realization so central to the idea of America, was closed to the slave unless and until he became a free man.

The American Dream, articulated, in words guaranteed to be understood by everyone. You close this book knowing not just about these people, you actually feel like you know them, especially Abe.

Impossible, after reading this book, not to wonder what our nation would look like had Lincoln survived his second term. Impossible not to grieve his loss.