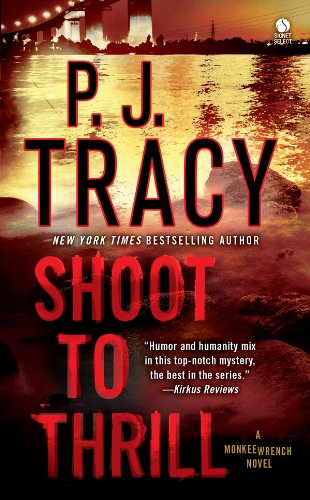 The fifth in the Monkeewrench crime series and the best so far. Killers are posting video of murders online. The killers are so good at concealing their online IDs that the FBI convenes a group of the worst known hackers to ask for their help. Monkeewrench, aka Grace MacBride, Annie Belinsky, Harley Davidson and Roadrunner and computer nerds extraordinaire, steps up to help Minneapolis police detectives Leo Magozzi and Gino Rolseth and FBI agent John Smith unravel a plot that feels far too realistic for the reader ever to be comfortable online again

“It’s a support structure. And her assumption is, it can escalate into reality from there. How many of the school shootings in the last few years would have happened if Columbine hadn’t happened first?”
“So what we might have is a bunch of amoral whack jobs telling the other amoral whack jobs out there that it’s A-okay to murder, and then they all start believing it for real?”
“Yeah, like that.”
“Sounds like Lord of the Flies and a twelve-step program for homicide all rolled into one.”
“That’s what she’s afraid is happening. That the Web is actually enabling these monsters and the community is getting stronger.”

and the usual terrific asides on Minnesota

“A Fed with a python miniskirt. That kind of gives me reason to live.”

Chelsea was sitting very quietly at the table, looking down at her lap as she listened to two homicide cops talk horror shop.

“And we’ve got a warrant. Judge said we had the go-ahead to search his nostrils with a power drill if we wanted.”

not to mention some first-rate social commentary

Judge Jim was sitting in his office, reflecting on the history of technology. Invariably, all the powerful technological tools that were invented for the good of mankind ultimately fell into hands that turned them toward evil. Dr. Richard Gatling invented his rapid-fire weapon because he thought it would end war. The A-bomb was invented for the same reason, and now every crazy fucker had one. The people behind weapons of destruction should have spent less time in their labs and more time on the streets, observing humanity. And now, the World Wide Web…

Great setting, great characters (with new ones in every sequel you wouldn’t mind following off into their own novels), and a very scary plot with an excellent twist at the end. Although I don’t think that can be the end, really. Read it and you tell me. Maybe I just don’t want it to be. Recommended.

All my Goodreads reviews here.