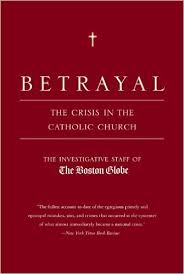 This is the story the Boston Globe did on pedophile priests that published in 2002 and exposed the culture of pedophilia in the Catholic Church nation- and worldwide. I’ve read some history and I have a lot of time spent in Ireland where the Church behaved even worse to its members (see the Ryan and Murphy reports), and all of the Catholic Church scandals are just a case study in that old aphorism, Absolute power corrupts absolutely.

The first few chapters are pretty grueling, detailing some of the predatory priests and their abuse of minor children in their care, but where this book gets really valuable is in the last four chapters and especially the last two. A few items: The authoritarian nature of the Old World Catholic Church was bound to clash with the values of New World Americans.

For many, the clergy sexual abuse scandal was the final straw in their relationship with the Church hierarchy, a relationship that had been fraying for several generations as U.S. Catholics struggled to balance their American values of democracy and egalitarianism with their Catholic understanding of authority and clericalism.

And don’t look for change from Rome anytime soon, because Rome, despite occurrences of clergy abuse in Catholic parishes all over the world, sees clerical abuse and the subsequent call for change as an American problem. It’s a matter of simple numbers.

The 60 million-plus Catholics in the United States made up a vibrant, and affluent, segment of the Church but were only 6 percent of Catholics worldwide…

There are a lot of American Catholics calling for change on many fronts (priests allowed to marry, the ordination of women, tolerance of homosexuality, contraception), but so long as they submit to the authority of Rome, nothing will. This is a hard thing for the faithful to accept

“I remember back in the 1950s if you ate meat on Friday, did not wear a hat or veil to church, or ate breakfast before Communion you could burn in hell for these sins,” said one Catholic layman, Victor Conlogue. “How come there is no mention of Geoghan going to hell?”

and may well in the end prove to be impossible, as witness the decline in church attendance, the precipitous drop in the number of priests, and the bankruptcy of Catholic dioceses across the nation. The chapter on “The Decline of Deference” is eye-opening if only as a portrait of from what heights the church had to fall. They were dizzyingly invulnerable to secular authorities in the US for a long time.

I won’t say this is a book for everybody but it’s a crisp march through the facts of the original story that expands into an overview of the Catholic Church’s role in American history and its place there today. And they don’t make any predictions, which I like.

***
I read this book because I saw and loved Spotlight, the film about the reporters and editors of the Boston Globe who investigated and reported the story of pedophile priests in Boston and, it turned out, all over the world. Don’t miss the film even if you’re grossed out by the topic, because it’s the best film of last year. It made a thriller out of the writing of a story, of all things, and I didn’t think that was possible without drama-ing it up (see All the President’s Men).

I also love the film because it shows journalists doing their jobs, even the ones who you can tell really don’t want to, like the assistant managing editor and the publisher, either of whom could have put the kibosh on the story from the getgo. It is extremely well written, the acting is superb (I didn’t know Liev Schreiber could do subtle and Michael Keaton has just never been better) and it is so well filmed. There is a scene where the Spotlight team finds out that the 13 pedophile priests in Boston they think they are writing about may really be more like 90, and the camera pulls back so excruciatingly slowly, dwarfing their figures in the story’s shadow. It’s the perfect visual metaphor for both stories.