As we do every year, Aaron Selbig and Terry Rensel and I get on KBBI’s Coffee Table on a Wednesday before Christmas and invite everyone within earshot to call in and tell us what books to give for Christmas.

Roberta likes Team of Rivals by Doris Kearns Goodwin (me, too!) and To Russia With Love by Vic Fischer and Charles Wohlforth (on my to-read list), but she loves three books by local author Joyce Baker Porte: Where Lions Still Roar, Rogue Lioness and Pale Lion Rising.

Lee (calling in from the Homer Bookstore, who can order any or all of these books for you, support you local bookstore!), likes Four Thousand Hooks by Dean Adams, Still Life: Adventures in Taxidermy by Melissa Milgrom (I’m so reading this book), and Destiny of the Republic by Candace Millard.

Bob called in from Soldotna and recommended Robert Service and anything ever written by Alaska Senator Bob Bartlett.

Larry recommended the Brooking’s Institution’s reissue of Jay Hammond’s Diapering the Devil under the title, The Governor’s Solution. He also recommends the US Navy Seabee Alaskan Oil Expedition of 1944, a real slice of Alaska history featuring everyone you ever heard of north of the fifty-three. He also likes M.J. McGrath’s The Boy in the Snow. I read White Heat, the first in this series of an Inuit guide on Ellesmere Island, and liked it.

Lately, Aaron has mostly been reading Spiderman comics to his five-year old.

Terry, the Winston Churchill fanatic, recommends Winston’s War by Michael Dobbs and The DeVelera Deception by Michael McMenamin and Patrick McMenamin, both first novels in series. He’s a history major so if he says a novel gets the details right, you know he liked the book. He couldn’t put down Jack Weatherford’s The Secret History of the Mongol Queens, and lately he’s been hip deep in Haruki Murakami and Kurt Vonnegut. 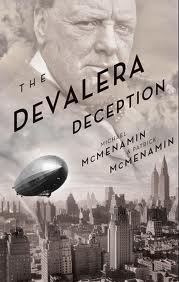 In fantasy, Hounded by Kevin Hearne.

In YA, Anna Dressed in Blood by Kendare Blake. A 17-year old ghost hunter inherited his father’s mantle way too soon, and then — oops — falls in love with the ghost he’s supposed to kill.

In general fiction, Mr. Penumbra’s 24-Hour Bookstore. An out-of-work software designer takes a job at a used bookstore, which isn’t quite what it seems. Yes, even now, there are quests to be made and ancient riddles to be solved. I’m smiling just typing those words.

In history, I saw Lincoln over Thanksgiving and now I’m going to have to reread Doris Kearns Goodwin’s Team of Rivals, upon which the film is based. I just last night finished David McCullough’s The Greater Journey, which is the story of a Who’s Who collection of Americans traveling to Paris in the 1800’s. Everyone’s here, Oliver Wendell Holmes (Sr.), Samuel Morse, Elizabeth Blackwell, Augustus Saint-Gaudens, John Singer Sergeant, Mary Cassatt, they’ve all come to Paris to study art or medicine or just to taken in the sights of the most beautiful city in the world. A wonderful read, but remember that the danger of this kind of book is you’re always putting it down to google the names to find out what happened to them after they left.

In Alaskana, Snap Decisions: My 30 Years as an Alaska News Photographer by Jim Lavrakas. Not just photos but anecdotes, from across the entire spectrum of Alaska life, breaking news, personalities, crime, fishing, hunting. This is the book you want to give that relative of yours you’ve been trying to entice into a visit all these years.

Whew, okay, I’m done. If I missed any, add them in the comments section below.