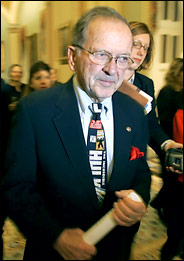 It was 1972 and Ted Stevens was coming to the University of Alaska Fairbanks campus to campaign for US Senator. At that time there was some act before Congress involving HUD that had much to do with Alaska. I was a reporter for the Polar Star, the UAF student newspaper, that semester, and my editor told me to go make Ted explain it to me.

So I get to the upper campus commons, where students are coming and going for supper, and Ted parks himself at a table and a group quickly forms to talk to him. I introduce myself and take a seat next to him. In a lull I ask him about the HUD program. I barely know what the initials stand for and it shows, but patiently and in words of one syllable he explains the whole act to me and the effect it will have on Alaska.

All the while students walk into the commons, spot him and come over to introduce themselves and talk about what is bothering them (that year it was the draft, big time). Later his opponent, Gene Guess, shows up and starts table-hopping and shaking hands. I go over to get a quote and then return to Ted’s table, where he picks up the thread of his HUD explanation without missing a beat.

I wrote up the story and turned it in. My editor, a Walter Burns-in-training who had no ability whatsoever to pay a compliment, read it and said in a surprised voice, “Man, I think I actually understand this.”

Ted was never warm and fuzzy but he was always interested. That evening he looked me and every other student straight in the eye and he paid attention to what we said. And he’d remember it, and us. I didn’t see him again for another eight years, this time in Prudhoe Bay. I said, “You probably don’t remember me, Senator, I’m–” And he said “Sure, I do, you’re Dana, I met you in Fairbanks in 1972.” I remember thinking, wow, I didn’t know I was that memorable.

I wasn’t. Ted was that good.

Ted Stevens did more for Alaska and Alaskans than anybody since William H. Seward. There isn’t a person or a community whose lives he didn’t improve in a real, material way. We drive on roads he got funded, there are hospitals and schools and libraries that wouldn’t exist without him, he even found funding for my Authors to the Bush program for Alaska Sisters in Crime, and, yes, we fly more safely than we ever did before because of Ted. Alaska is what it is today largely because of his efforts in D.C., and there never was and never will be a better constituent representative.

We didn’t always agree. I’ve still got a copy of the letter I sent him when we were getting ready to go into Iraq the second time, and I vividly remember the page and a half he sent in reply. Ted was never afraid to engage in a dialogue. And he always, always wrote back.

You be wearing that Hulk tie now, Senator, just in case St. Peter has any second thoughts about opening up them gates.