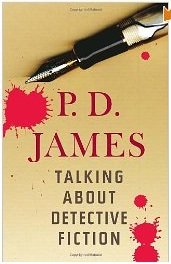 In Talking About Detective Fiction, P.D. James takes less than 200 pages to lay out the history of crime fiction and to zero in mostly on what works in the genre, and how. Here, in a single sentence, she sums up the classic crime fiction novel, “What we can expect is a central mysterious crime, usually murder; a closed circle of suspects, each with motive, means and opportunity for the crime; a detective, either amateur or professional, who comes in like an avenging deity to solve it; and, by the end of the book, a solution which the reader should be able to arrive at by logical deduction from clues inserted in the novel with deceptive cunning but essential fairness.”

I’m thinking of having that sentence bronzed and put on my wall.

All the usual detectives are rounded up and put into perspective with wit and style, from Sherlock (“…the sitting-room was Sherlock Holmes’s office and the place where he received his visitors, which meant that Watson had to be banished to his bedroom when anyone arrived on business, which was not infrequently. It hardly seems a satisfactory arrangement.“) onward, and I am happy (and my banker relieved) to report that James is optimistic about the genre’s future.

“…the detective story…is particularly popular in times of unrest, anxiety and uncertainty, when society can be faced with problems which no money, political theories or good intentions seem able to solve or alleviate,” she writes. “The classical detective story can work in any age provided murder is regarded as an act which necessitates the discovery of the perpetrator and the cleansing of society of its stain…I see the detective story becoming more firmly rooted in the reality and the uncertainties of the twenty-first century, while still providing that central certainty that even the most intractable problems will in the end be subject to reason.”

Yay, sister. She thinks e-books are okay, too, so there.

Be warned, James names names, and by the end of the book I had a scribbled list of more books I had to read (like my to-read shelf isn’t already groaning in protest) or re-read, including

Ngaio Marsh’s Roderick Alleyn series, in particular the ones set in New Zealand, Vintage Murder, Colour Scheme, and Died in the Wool.

“…perhaps the most interesting example of a mainstream novel which is also a detective story is the brilliantly structured Emma by Jane Austen. Here the secret which is the mainspring of the action is the unrecognised relationships between the limited number of characters. The story is confined to a closed society in a rural setting, which was to become common in detective fiction, and Jane Austen deceives us with cleverly constructed clues (eight immediately come to mind) — some based on action, some on apparently innocuous conversations, some in her authorial voice. At the end, when all becomes plain and the characters are at last united with their right partners, we wonder how we could have been so deceived.“

You’re on your own.